INTERVIEW WITH MR. WASHINGTON SYCIP Founder and Chairman of SGV 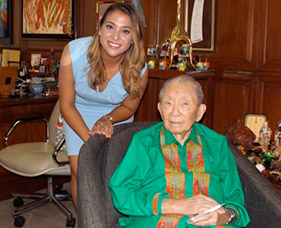 “the education efforts should be concentrated on the bottom group instead of trying to develop people for leadership. That, SGV is doing. When I retired, I have nothing more to do with SGV.”

Please tell us more about the history and the background of the company and what key strategic moves were made to bring the group where it is today?

A little bit of history, when I passed the CPA examination, I was 18 years old. The golden regulation is that you cannot start an audit firm unless you get your CPA license until you’re 21. So at the age of 18, I could teach but I cannot start my professional life. I went to the US to get my Ph.D at Columbia University. Unfortunately, after I passed all my oral and written examination, the only thing lacking was my oral dissertation. During that time while I was doing my research, the Japanese bombed the Clark Air Base and at the same time, bombed the Pearl Harbor. So, I was in the library on that same day. The Japanese came over quickly all over Southeast Asia. In many ways they are smarter than the colonial masters. In Singapore, the guns were traded in the sea. They went from Malaysia down to Singapore. They invaded Singapore and Malaysia and came through Lingayen Gulf to Corregidor, They quickly took over Manila. The rule of the Japanese is that Asia should be ruled by Asians. So they asked my father who was Chairman of China Bank, one of the 2 biggest banks at that time, to head up the Greater East Asia called the Prosperity Suite. My father didn’t want to comply with the Japanese so he got locked up in prison. I was in the US when I heard about that. I joined the US military to enter back to the country. I joined the Philippine Infantry that was trained to come back here. After 3 months of completion in the infantry, we had an interview. They told me that the infantry is short of people who are intelligent. So transferred me to the Intelligence unit and sent me to a Japanese school to learn cryptography. I was sent to India where I stayed trying to work with the Japanese until the end of the war. I stayed in India for about 3 years. After that, I came back here and started a one-man shop.

SGV & Co is the largest profesional services firm in The Philippines. SGV main-tains its lead among auditors in the country with a 40% market share of the highest-grossing companies included in the 2013 edition of BusinessWorld’s Top 1000 Corporations in the Philippines. What makes your company different from other companies in the sector and what are your main strengths and competitive advantages?

Well, the reason is that the most firms here are of Western origin. All the partners are what we call ‘Puti’ or white. The thing is that a Filipino has no chance to become a partner. All other Filipino firms were started by someone getting their son ready to succeed them. So one was discrimination by color of skin and the other by what kind of blood you have. I saw that as a weakness of a particular practice. I went around universities and hired from different classes. I started a small firm which eventually will grow but it is based completely on meritocracy. That’s why I got the brightest people from the schools. You win by the kind of people you have in the organization.

In 1966, on SGV’s 20th year, Washington SyCip, together with co-founder Alfredo M. Velayo and partners Cesar E. A. Virata, Benjamin V. Abela, and Erlinda T. Vi-llanueva, established the SGV Foundation, Inc. W. You have related in your biography that he wanted to develop social conscious-ness among his partners, to show their concern for the country and the communi-ty. How is the company supporting a positive impact on the socio-economic devel-opment of the Philippines?

There are 2 phases. When I was in the firm, my core idea was to get people to assume leadership. I mean let’s say, Secretary of Finance and the Secretary of Industry came from our firm. Central Bank governor started as trainee in our firm and many others that are in leadership in the country. That’s why I started the graduate school, Asian Institute of Management.

What are the main challenges of the country that affect the investors that are thinking in coming to the country?

Education. The main challenge is how to get rid of obsolete ideas. In other words, our main problem is population with over 100 million people in the country. The education system under the US regime was much better because they had money to support the schools. But with our population and the Catholic Church unwilling to support family planning, our population grew faster than the income. The quality of education is starting to go down. Right now, of 100 million people, 3 million are illiterate. They cannot read and cannot write. At the beginning, as far as the firm is concern, the training of people for leadership is very successful. After I retire from the firm, I started to see the social problems of the country. The status of the bottom group has to improve. But how do they improve their status? The key is again, education but inaccessible to the bottom group

Could you please tell us about your main current projects and which makes you most excited about?

It’s the education. The poorer you are in the Philippines because of the Catholic Church, the more children you have. A fisherman may have 6-8 children. He can send half of them to public schools but he still has to buy them tsinelas and shirts. Does he have the money to buy notebooks, pencils, or pens? That’s the poor don’t have. Half the children are in school but half of them are left uneducated. That’s the problem. When I retired from the firm, I continued the foundation as my main concern for the bottom group.

What is your final message to our readers, regarding to the market and the op-portunities in Manila and in Philippines. What would you say to people who have historically been fed negative and have been misinformed regarding Philippines?

As far as I am concerned, the education efforts should be concentrated on the bottom group instead of trying to develop people for leadership. That, SGV is doing. When I retired, I have nothing more to do with SGV. I have other phase that I’ve concentrated on. As of the end of last year, I have a 100,000 students in school that otherwise would be illiterate. They would not have any fund to go to school. By the end of this year, the funding that has been given to the organization carrying out this program will be enough to send 200,000 kids to schools. That still is quite a small number compared to 3 million very poor children.

Where do you see you foundation in the next years?

How do you see the country in the next years? What can you say to the foreign investors about the country?

As far as the foreign group is concern Los Angeles or from any other area, I talked to almost all the investors. They should get into whatever are of manufacturing or education or whatever they want to do. Let’s say the Japanese companies are our largest investors who venture mostly in manufacturing. The outsourcing industry (BPO), I started that in 1984 which now has a direct employment of 1 million people. I could see it clearly before that we need people that are knowledgeable with what the computer can do. In 1984, the first center for training of people was built and after that, the job creation involved jobs from the US to be sent here. My friend helped me settle the center here. We had a joint venture with the IBM which created a lot of employment. The success of the retail operations here are now encouraging the Japanese to manufacture their garments here with the Chinese income going too high. Job creation is critical. For a company abroad, the main thing is to set up a firm which will eventually grow bigger.